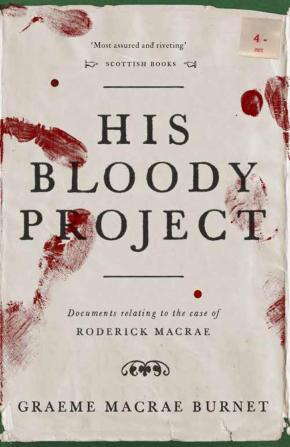 Shortlisted for the 2016 Man Booker Prize

The year is 1869. After a brutal triple murder in a remote community in the Scottish Highlands, a young man by the name of Roderick Macrae is arrested for the crime. A memoir written by the accused makes it clear that he is guilty, but the police and the courts must decide what drove him to murder the local village constable. And why did he kill his other two victims? Was he insane? Or was this the act of a man in possession of his senses? Only the persuasive powers of his advocate stand between the killer and the gallows at Inverness. In this compelling and original novel, using the words of the accused, personal testimony, transcripts from the trial and newspaper reports, Graeme Macrae Burnet tells a moving story about the provisional nature of the truth, even when the facts are plain. His Bloody Project is a mesmerising literary thriller set in an unforgiving landscape where the rules can change but justice is absolute.