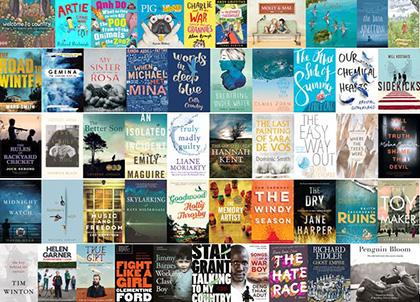 Many thanks to our Awards sponsors:

The Shortlist will be announced on 16 January 2017, with the Category Winners and the Overall Book of the Year Winner being announced at the Leading Edge Books 2017 Conference on Monday, 20th March 2017 at the Marriott, Surfers Paradise.

The Longlist for The Indie Book Awards 2017 is:

The Easy Way Out by Steven Amsterdam (Hachette Australia)

Between a Wolf and a Dog by Georgia Blain (Scribe Publications)

The Rules of Backyard Cricket by Jock Serong (Text Publishing)

Where the Trees Were by Inga Simpson (Hachette Australia)

Fight Like a Girl by Clementine Ford (Allen & Unwin)

Talking To My Country by Stan Grant (HarperCollins Australia)

The Boy Behind the Curtain by Tim Winton (Penguin Books Australia)

What do they do with all the Poo from all the Animals at the Zoo? by Anh Do & Laura Wood (Illus) (Scholastic Australia)

Artie and the Grime Wave by Richard Roxburgh (Allen & Unwin)

The Other Side of Summer by Emily Gale (Random House Australia)

The Sidekicks by Will Kostakis (Penguin Books Australia)

The Road to Winter by Mark Smith (Text Publishing)

The Shortlist will be announced on 16 January 2017, with the Category Winners and the Overall Book of the Year Winner being announced at the Leading Edge Books 2017 Conference on Monday, 20th March 2017 at the Marriott, Surfers Paradise.