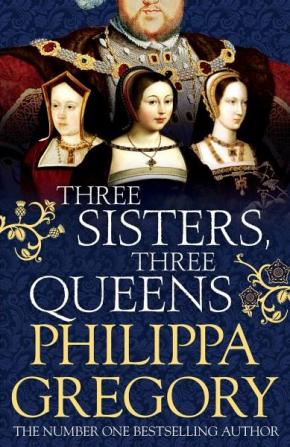 "There is only one bond that I trust: between a woman and her sisters. We never take our eyes off each other. In love and in rivalry, we always think of each other."

When Katherine of Aragon is brought to the Tudor court as a young bride, the oldest princess, Margaret, takes her measure. With one look, each knows the other for a rival, an ally, a pawn, destined – with Margaret’s younger sister Mary – to a sisterhood unique in all the world. The three sisters will become the queens of England, Scotland and France.

United by family loyalties and affections, the three queens find themselves set against each other. Katherine commands an army against Margaret and kills her husband James IV of Scotland. But Margaret’s boy becomes heir to the Tudor throne when Katherine loses her son. Mary steals the widowed Margaret’s proposed husband, but when Mary is widowed it is her secret marriage for love that is the envy of the others. As they experience betrayals, dangers, loss and passion, the three sisters find that the only constant in their perilous lives is their special bond, more powerful than any man, even a king.

Q & A with Philippa Gregory

Margaret Tudor as depicted in your novel comes across as a really strong character, a woman who has experienced incredible highs but also almost impossible to believe lows, ultimately a woman who fought a battle against being simply a pawn all her life. You have spent a lot of time with this character; do you think that she was naive or very brave?

I think she was brave in the way that women often find they are brave – that they are in a situation out of their control in which they have to dig deep, endure, and get themselves out as best they can, as soon as they can. In her case we see she has to abandon her two children one after another in order to get herself safe and I am sure that was terribly painful and difficult. She also has to endure extraordinary physical danger and pain. But because she is a Renaissance woman in a difficult time she doesn't have much choice. Certainly I think of her as strong because she survives all this to die in her bed as an old lady, in her own country, in reasonable wealth and with respect and some affection from her family. For me, the most interesting thing about the novel is contributing to a new view of Margaret. Previous historians have thought she was foolish and got herself into trouble. I think that she started in difficult circumstances and did the best that she could, that her actions were sometimes foolish but often very strategic.

Although your new novel Three Sisters, Three Queens is told in the voice of Margaret Tudor, you allow the reader to hear the voices of Katherine of Aragon and Mary Tudor through their numerous letters. Were these letters real or did you imagine the voice of these three remarkable women? What sources helped you in re-imagining them each as a person rather than a monarch?

Some of these letters are real and can be read in the National Archives, which gives an amazing insight into the lives of these people. Most of them I have created based on the letters that we do have, on the chronicles of the time which tell us what was happening, and on the research of later historians who give us insight into the 'why' of history. All three women have suffered from misogynist historians who start their researches with the assumption that women are not very bright, and so are likely to make mistakes in their lives, and then explain things that go wrong by female weakness. So very often I am reading for the character through the history and thinking about alternative explanations.

The story of Margaret of Tudor is removed from our time by 500 years, and although the lives of nobles would have been relatively well documented there are many parts of women’s lives that remain relatively unknown to us. Are there any particular moments in the life of Margaret that you would have liked to have asked her about if you ever had a chance?

Almost all her personal life is a mystery – we know that she married Archibald Earl of Angus in secret but we don't know why. I know that she named him on her deathbed but I don't know if she thought of him with love at the end of her life. I would like to know about her emotional life, especially her relationships with her husbands and her children, I should like to know how she felt about her adopted country of Scotland. But this is the joy and the challenge of historical fiction – to create the inner life, which must always be speculation.

You are very well known for amazing research and an incredible attention to historical details, and you have been writing about the Tudors for quite a few years – what are some of the things that surprised you the most in your research?

I go on being surprised by the strength of the women who are barely mentioned in the histories, and by the amount that they actually did – which also gets overlooked. I started thinking that I was finding exceptional women – but then I kept on and on finding them! I think now that the women of the Tudor world were mostly capable of strategic planning and successful execution and that if you look for their actions you will find them. It is the men at the time and the later historians who – assuming that women are ill-judging and feeble – put down female success to 'luck' and female failure as typical.

What are your favourite sites that are connected to the Tudor family and what makes them so special for you?

For this novel I spent some time in the palaces and castles of Scotland and they are extraordinarily beautiful. I love medieval architecture in general but some of the places in the book are remarkably lovely. Many of them are little visited and not well known so it is very special to be somewhere so old, that has been central to the story I am telling, and find oneself there quite alone. Tantallon Castle at sunset was very memorable for me. Linlithgow Palace with 'Margaret's Bower' where she is said to have watched for the safe return of her husband is another wonderful and well-preserved site.

Are there any particular historical figures that you would like to write about? (i.e. what is next?)

My next novel is going to be about Jane Grey – famously queen for nine days – and her family. These are the Greys descended from Elizabeth Woodville's son with her first husband so I am staying in the family, though at a later period.