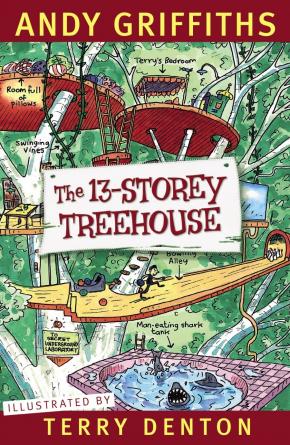 by Andy Griffiths and Terry Denton

Book 1 in the best-selling series

Who wouldn't want to live in a treehouse? Especially a 13-storey treehouse that has a bowling alley, a see-through swimming pool, a tank full of sharks, a library full of comics, a secret underground laboratory, a games room, self-making beds, vines you can swing on, a vegetable vaporiser and a marshmallow machine that follows you around and automatically shoots your favourite flavoured marshmallows into your mouth whenever it discerns you're hungry. Two new characters – Andy and Terry – live here, make books together, and have a series of completely nutty adventures. Because: ANYTHING can happen in a 13-storey treehouse. This is a major new series from Andy and Terry- and it's the logical evolution of all their previous books. There are echoes of the Just stories in the Andy and Terry friendship, the breakaway stories in the Bad Book (the Adventures of Super Finger), there's the easy readability of the Cat on the Mat and the Big Fat Cow , and like all these books, the illustrations are as much a part of the story as the story itself.