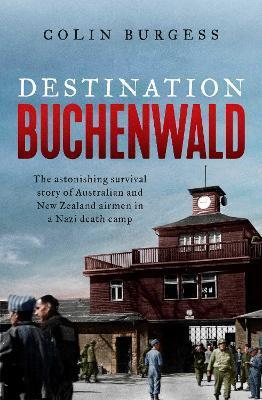 The harrowing story of the Allied airmen who experienced the true horrors of Nazism firsthand.

It was the summer of 1944 as liberating Allied forces surged towards Paris following the D-Day landings. For a large group of downed airmen being held in that city's infamous Fresnes Prison, they were about to face evacuation into the blackest, bloody heart of Germany and experience the most acute evil of the war. Amid great secrecy, those 168 airmen - including several from Australia and New Zealand - were transported on a filthy, overcrowded nightmare train journey which ended at the notorious Buchenwald concentration camp, accompanied by orders for their execution. At Buchenwald they witnessed extreme depravity that would haunt them to the end of their days. Yet, on returning home, they were confronted by decades of denials from their own governments that they had ever been held in one of Hitler's most vile concentration camps. In conducting his original deep research for this book - now completely expanded and updated - Colin Burgess personally interviewed or corresponded with dozens of the surviving airmen from a number of nations, including their valorous leader, New Zealand Squadron Leader Phil Lamason. Destination Buchenwald tells a compelling story of extraordinary bravery, comradeship and endurance, when a group of otherwise ordinary servicemen were thrust into an unimaginable Nazi hell.