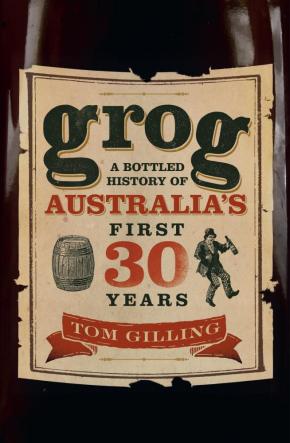 Even before James Squire set sail as a convict aboard the First Fleet, liquor was playing its part in shaping the colony-to-be.

Who was entitled to it and who wasn't; who could make and sell it and who couldn't; and how the young and thirsty colony could make itself self-sufficient in booze. As the colony grew, rum became both a currency and a source of political strength and instability, culminating in the Rum Rebellion in 1808, and what one observer said was a society of 'drunkenness, gaming and debaucheries'.

Now, with Grog, writer Tom Gilling presents a compelling bottled history of the first three decades of European settlement: how the men and women of New South Wales transformed the colony from a squalid and starving convict settlement into a prosperous trading town with fashionable Georgian street names and a monumental two-storey hospital built by private contractors in exchange for a monopoly on rum.

Grog is a colourful account of the unique beginnings of a new nation, and a unique insight into the history of Australia's long love affair with the hard stuff.