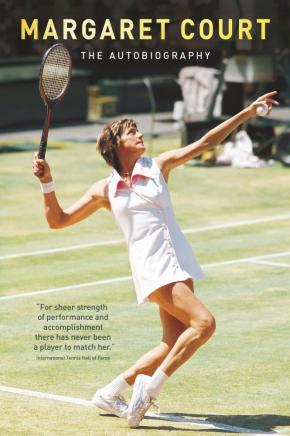 In 1970 Court became the first woman in the open era to win the singles Grand Slam (all four major tournaments in a calendar year). The youngest player in history to win the Australian Open at 17, "the Aussie Amazon" then won 24 singles, 19 doubles and 21 mixed doubles titles, for an extraordinary career record of 64 major titles overall. Yet Margaret Court is a controversial figure today for often hard line religious views. This long-awaited autobiography explains what lit a fire in the poor girl from Albury and made her the greatest champion tennis has seen and the fierce woman she is. Court was born in 1942 to a hard-living father and acutely agoraphobic mother. Her first 'racquet' was an old fence paling, but after winning French, US and Wimbledon championships as a teenager, she held the world #1 ranking for seven of her 17 years on the professional circuit, touring with her two of her four children during her long reign. But having risen so high Margaret fell hard in retirement. After a period of depression and seclusion, she was reborn in 1991 as an ordained minister and founder of Victory Life Churches. Today, 'Pastor Marg' preaches to 1500+ every Sunday and feeds thousands of Perth's lost, homeless and hungry via her charities.