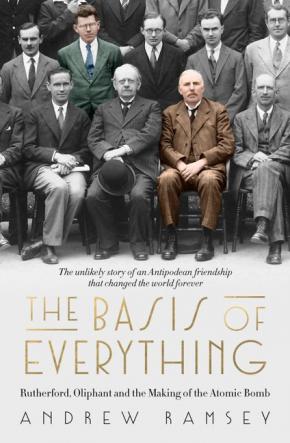 The Basis of Everything

The story that bonds Ernest Rutherford and Marcus Oliphant is as extraordinary as it is unlikely. Kindred souls, both schooled and steeped in the furthest frontiers of Britain's Empire. Scientists whose restless intellect and tireless conviction fused in the Cavendish Laboratory's famed crucible of discovery. At a time when nature's deepest secrets were being revealed, and the planet's very future cast in shadow. Theirs was a friendship forged in shared history although they were born thirty years and 3,000 kilometres apart. Rutherford, the thunderous son of a New Zealand flax farmer, would be recognised as the foremost experimentalist of his epoch. In his proving ground of genius at Cambridge University, he fathered the field of nuclear physics and his vision captivated the young Oliphant at their first fateful encounter. In the backyard workshops of Adelaide's hills and suburbs, Oliphant had honed his rare gift for invention that would see him ordained as right-hand man to the world's most acclaimed scientist. Oliphant's towering frame and steely belief then loomed large over the end-product of their urgent, ominous research â€“ the first atomic bomb. This is the intertwined tale of remarkable men whose brilliance illuminated the sub-atomic recesses of the natural world and, as a direct result, set loose the power of nuclear fusion.