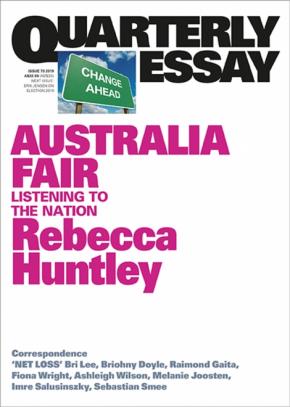 Rebecca Huntley on Progress and Politics

In this vivid, grounded essay, Rebecca Huntley looks at the state of the nation and asks: what does social-democratic Australia want, and why?

For some time, a majority of Australians have been saying they want change – on climate and energy, on housing and inequality, on corporate donations and their corrupting effect on democracy, to name just a few.
Recent attention has focused on the angry, reactionary minority. But is there a progressive centre? How does it see Australia’s future? And what is to be learned from the failures of previous governments? Was marriage reform just the beginning, or will the shock-jocks and their paymasters hold their ground?