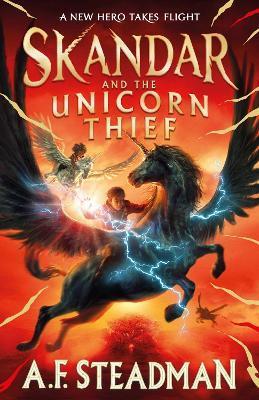 Skandar and the Unicorn Thief

The first book in the hotly anticipated new fantasy adventure series for readers age 9+, from A. F. Steadman. If you like Harry Potter, Percy Jackson, Eragon or His Dark Materials, you'll love this . . .

Unicorns don't belong in fairy tales; they belong in nightmares. So begins Skandar and the Unicorn Thief. Soar into a world where unicorns are real â€“ and they're deadly. They can only be tamed by the rider who hatches them. Thirteen-year-old Skandar Smith has only ever wanted to be a unicorn rider, and the time has finally come for him to take his Hatchery Exam, which will determine whether he is destined to hatch a unicorn egg. But when Skandar is stopped from taking the exam, and the mysterious and frightening Weaver steals the most powerful unicorn in the world, becoming a rider proves a lot more dangerous than he could ever have imagined. And what if Skandar was always destined to be the villain rather than the hero? Get ready for unlikely heroes, elemental magic, fierce sky battles, ancient secrets, nail-biting races and, of course, bloodthirsty unicorns. This will be the biggest new series of 2022.