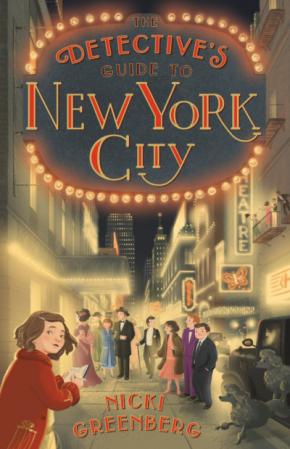 From the bright lights of Broadway to back-alley speakeasies, Nicki Greenberg has brought 1920s New York City to life in this delightfully thrilling mystery set in the same world as The Detective's Guide to Ocean Travel.

Pepper Stark could not be more thrilled to return to New York City with her father, the Captain. Not only will she be back in the place where her late mother once lived but also she'll reunite with her friends Norah and Sol. But Pepper's excitement for her trip fades when the Captain invites along his new friend Emmaline and her son, Elliott. Still, Pepper is determined to make the most of her time with her friends in the Big Apple, revelling in the energy of the city that never sleeps. But when dinner at the swanky restaurant where Sol is working ends in the suspicious illness of notorious food critic Anthony 'the Shark' Sharkey, Pepper finds herself entangled in yet another crime. With only a week before she has to return home, Pepper, Sol, Norah and a reluctantly recruited Elliott are facing an even bigger challenge than the Saffron Diamond mystery, and the stakes have never been so high. If they don't find the culprit, Sol's chef career could be over ... or worse. And New York City might become the place where all of their dreams turn to dust.