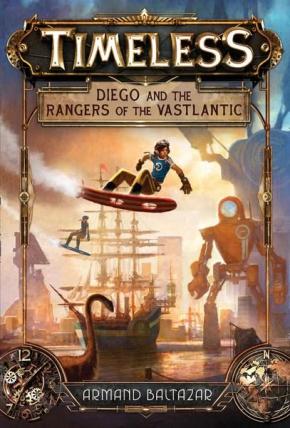 Diego And The Rangers

Imagine a world where the past, present and future have collided. A world that is timeless. This is the world Diego Ribera was born into… For fans of Rick Riordan and Brian Selznick, author-artist Armand Baltazar introduces the first book in a new fantasy adventure series. Over 150 full-colour illustrations bring this cinematic story to life! You've never seen Earth like this before: continents reshaped, oceans re-formed, cities rebuilt, and mountains sculpted anew. Dinosaurs roam the plains alongside herds of buffalo, and giant robots navigate the same waters as steam-powered ships. In New Chicago, Diego's middle school hallways buzz with kids from all eras of history and from cultures all over the world. The pieces do not always fit together neatly, but this is the world he loves. There are those, however, who do not share his affection. On his thirteenth birthday, Diego learns of a special gift he has within, a secret that is part of something much bigger – something he cannot understand. When his father, New Chicago's top engineer, is taken by the Aeternum, Diego must rescue him and prevent this evil group from disrupting the fragile peace humanity has forged.