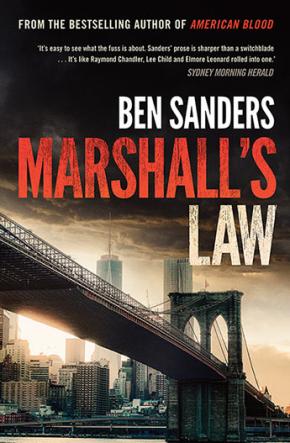 Marshall Grade is back, still trying to escape the remnants of his old life. The gritty, explosive new novel from the bestselling author of American Blood is a white-knuckle ride that will have you ducking for cover!

It's easy to see what the fuss is about. Sanders' prose is sharper than a switchblade ... It's like Raymond Chandler, Lee Child and Elmore Leonard rolled into one.' Sydney Morning Herald

Ex-undercover cop Marshall Grade is hiding out in California when he learns that federal agent Lucas Cohen has survived a kidnapping. Cohen was Marshall's ticket into witness protection, and his captors have a simple question: where's Marshall now?

Marshall's undercover work gave him a long list of enemies, and the enemy in this case is a corrupt businessman named Dexter Vine. Vine's almost broke, in debt to people even worse than himself, and he wants to settle old scores while he has time. He's hired Ludo Coltrane - a nonchalant psychopath and part-time bar manager - to find Marshall at any cost. Ludo's no stranger to killing, but his associate, the cash-strapped ex-con Perry Rhodes, may prove more of a liability than an asset.

The question is: what has Marshall done to make Dexter want him dead? And are the contacts from his old life - ex-colleague Lana, and the heroin dealer Henry Lee - prepared to help him, or will they just sell him out?