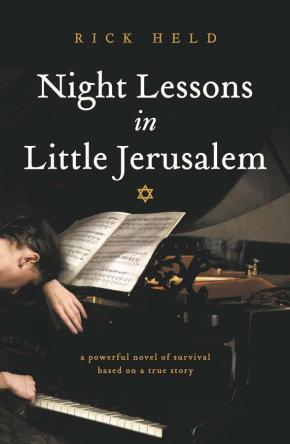 A powerful debut novel based on a true story for those who lovedÂ THE TATTOOIST OF AUSCHWITZ and ALL THE LIGHT WE CANNOT SEE.The hero of this book was not a saint, nor even a tzadik - the nearest Jewish equivalent - but he was a hero. Someone who risked his own life to make a difference to the life of another. Were his motives selfless? No. He was after all flesh and blood. A man. And a very young one. But life is not black and white. Heroes are not without their flaws. This is his story.

Tholdi is a romantic. A musical prodigy whose brilliant future is extinguished when the horror unfolding across Europe arrives at his door. One day he's captivated by the beautiful, mysterious Lyuba who he meets on his sixteenth birthday; the next he wakes to the terrors of war as the Nazi-allied Romanians attack his town of Czernowitz.A ghetto is built to imprison the town's Jews before herding them onto trains bound for the concentration camps of Transnistria. With each passing day, Tholdi and his parents await their turn. And then Fate intervenes, giving them all a reprieve.At the weaving mill Tholdi secures work that spares him. He is elated. Until he discovers the two brothers who run the mill are Nazi collaborators hiding a terrible secret: the threat of transportation remains. When Tholdi sees one of the brothers with Lyuba, he glimpses a way to save himself and his family. But the stakes of his gamble are high. Will Lyuba be the key to their survival, or will Tholdi's infatuation with her become a dangerous obsession that guarantees their death?