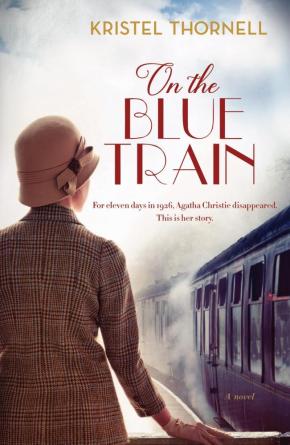 On the Blue Train

What did happen to Agatha Christie during her mysterious eleven-day disappearance just as she was on the cusp of fame? Mixing fact and fantasy, an entrancing novel of creativity and grief.

From the winner of the Dobbie Literary Award, the Barbara Ramsden Award and the Andrew Eiseman Award.

Yes, she said, finally. Breaks are important. There are times when it's wiser to get away. From it all.

It was the work of a moment: On 4 December 1926, Agatha Christie became Teresa Neele, resident of the spa hotel, the Harrogate Hydro. With her wedding ring left behind, and her minimal belongings unpacked, the lost days begin.

Lying to her fellow guests about the death of a husband and child, Teresa settles in to the anonymity she so fiercely desires. Until Harry McKenna, bruised from the end of his own marriage, asks her to dance.

In this entrancing novel of creativity and grief, Kristel Thornell combines fact and fantasy to reconstruct Agatha Christie's retreat from a life that had become too difficult. With verve and sensitivity, Thornell imagines what Christie could not write.