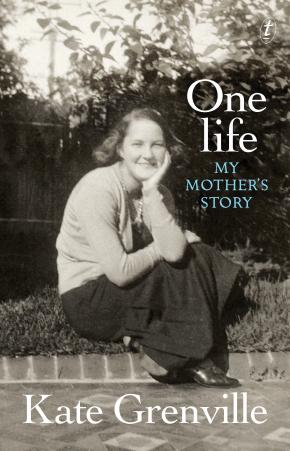 Nance was a week short of her sixth birthday when she and Frank were roused out of bed in the dark and lifted into the buggy, squashed in with bedding, the cooking pots rattling around in the back, and her mother shouting back towards the house: Goodbye, Rothsay, I hope I never see you again!

When Kate Grenville's mother died she left behind many fragments of memoir. These were the starting point for One Life, the story of a woman whose life spanned a century of tumult and change. In many ways Nance's story echoes that of many mothers and grandmothers, for whom the spectacular shifts of the twentieth century offered a path to new freedoms and choices. In other ways Nance was exceptional. In an era when women were expected to have no ambitions beyond the domestic, she ran successful businesses as a registered pharmacist, laid the bricks for the family home, and discovered her husband's secret life as a revolutionary. One Life is an act of great imaginative sympathy, a daughter's intimate account of the patterns in her mother's life. It is a deeply moving homage by one of Australia's finest writers.