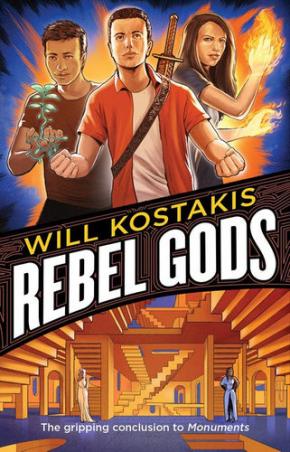 Newbie gods Connor, Sally and Locky want to change the world-no biggie. But they are soon drawn into a centuries old conflict that just might destroy the world they are striving to make better. Book 2 in the Monuments fantasy duology from YA superstar, Will Kostakis.

With the Monuments gone, newbie gods Connor, Sally and Locky must stop the rebel gods from reducing the world to ruin. Trouble is, they don't know how. While Sally searches for answers and Locky makes plans to change the world, Connor struggles to keep up appearances as an ordinary teenager. But when a rebel god offers them a deal to end the chaos, their lives are turned upside down and they're forced to reckon with the question: who should decide the fate of the world? Rebel Gods is the is the gripping conclusion to Monuments, a Children's Book Council of Australia Notable Book 2019, from YA superstar, Will Kostakis. It's a heartfelt look at family, friendship and the parallel lives we lead.