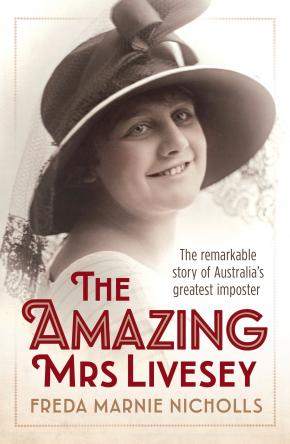 The truly remarkable life of the notorious Ethel Livesey, a serial fraudster and confidence trickster who became a media sensation after she ran out on her society wedding in 1945 and was later arrested for obtained goods by false pretences.
Ethel Livesey was quite a gal.
An attractive young woman from a respectable middle-class family in Manchester, she had over 40 aliases, eight official marriages, four children and five divorces. Her story stretches from industrial England to the French Riviera, from Ireland to New York, Shanghai, New Zealand, the Isle of Man and across Australia. Ethel claimed she was a cotton heiress, wartime nurse, casino hostess, stowaway, artist, opera singer, gambler, spy, close friend of the King, air raid warden, charity queen and even wife of Australian test cricketer Jack Fingleton.
When her career imploded (with the abandonment of her glittering society marriage in post-war Sydney just two hours before the guests were due to arrive), the story of the Amazing Mrs Livesey was blazoned across newspapers around the world. But what was fact and what was fiction?
With a prologue by Ethel Livesey's granddaughter, this extraordinary and constantly surprising story of the woman who was possibly Australia’s greatest fraudster is told for the first time in rich and fascinating detail.