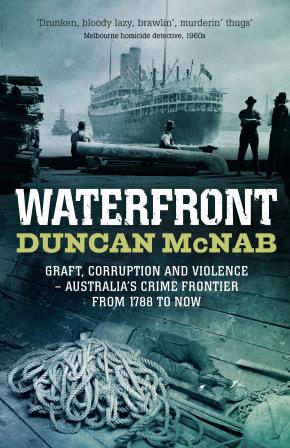 The colourful and exciting story of the larger-than-life characters who have populated Australia's docks, wharves and ports from the First Fleet to today - and the crime, violence and corruption that has always been present.

Ever since the First Fleet dropped anchor, Australia's ports have been our opening to the world. They are also the breeding ground for many of Australia's most notorious criminals, and a magnet for local and overseas criminal syndicates. WATERFRONT is the story of the crimes, the politics, the characters and the corruption in our nation's ports. From the time of Phillip and Bligh to today, from the gold rushes to modern-day drug smuggling, a criminal element has always found ways to profit from the rise and dominance of waterfront unions. After a century of Royal Commissions, reports, denials and crackdowns, crime and wrongdoing in Australia's ports remains organised, entrenched and incredibly profitable. Investigative journalist and former police detective Duncan McNab lifts the lid on the intriguing and chequered history of Australia's waterfront.