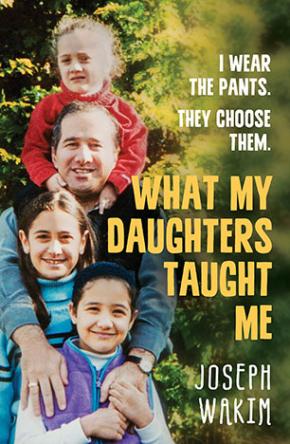 What My Daughters Taught Me

A heartwarming memoir of a widower bringing up his three daughters - and the precious life lessons they taught him along the way.

Without a word spoken, mothers effortlessly read a room, gauging its temperature, scanning their children's faces and measuring their heartbeats . This is the language of love, a language that should not be the monopoly of mothers. It is a language that we men can reclaim and relearn, as it lies dormant within us, waiting to be brought back to life. I was sure that whoever gave women this gift would not have bypassed fathers, in case they ended up like me.' When Joseph Wakim's wife died of breast cancer in 2003, his three daughters were only eleven, nine and four years old. Despite well-meaning friends, family and even strangers telling him he would need help to bring up his daughters, Joseph followed his heart and did the job his way, trusting that he - and the girls - would know what to do. To stop himself from succumbing to grief and taking his daughters with him, Joseph relied on humour and honesty as they all learned to live again and celebrate life, while honouring the memory of his beloved wife, Nadia. Twelve years later, the family is thriving, and Joseph and his daughters have learned hard and valuable truths about each other - and themselves. This moving and engaging memoir will touch the hearts of parents and children everywhere, and may even provide some secrets to family harmony that we can all share.