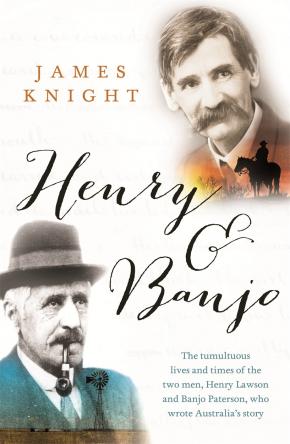 The fascinating lives and turbulent times of Henry Lawson and Andrew 'Banjo' Paterson - the two men who wrote Australia's story.

Today most of us know that Henry Lawson and Andrew 'Banjo' Paterson were famous writers. We know about Matilda, Clancy of the Overflow and the Man from Snowy River; The Drover's Wife, While the Billy Boils and Joe Wilson and his mates, but little else. Here, in a compelling and engaging work, James Knight brings Henry and Banjo's own stories to life. And there is much to tell. Both were country born, just three years and three hundred kilometres apart, Henry on the goldfields of Grenfell and Banjo on a property near Orange, but their paths to literary immortality took very different routes - indeed at times their lives were ones of savage and all too tragic contrasts. Banjo, born into a life of comparative privilege, would rise from country boy to Sydney Grammar student, solicitor, journalist, war correspondent and revered man about town. Henry's formal education only began when his feminist mother finally won her battle for a local school but illness and subsequent deafness would make continuing his lessons difficult, seeing him find work as a labourer, a coach painter and a journalist, all the while wrestling with poverty, alcoholism and mental illness. Both men would become household names during their lifetimes. Both would have regrets. HENRY AND BANJO details two incredibly fascinating lives and delves into the famous (and not so famous) writings of the two men who had the power to influence and change Australia.