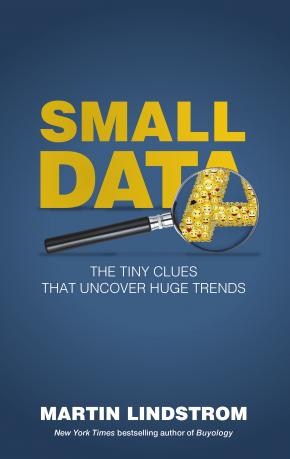 Small Data presents a behind-the-scenes look at what it takes to create global brands and reveals surprising and counter-intuitive truths about who we are and what connects us as humans.

Named a "Book Retailers Should Read in 2016" by Shelf Awareness

In an era where many believe Big Data has rendered human perception and observation 'old-school' or passe, Martin Lindstrom shows that mining and matching technological data with up-close psychological insight creates the ultimate snapshot of who we really are and what we really want. He works like a modern-day Sherlock Holmes, accumulating small clues - the progressively weaker handshakes of Millenials, a notable global decrease in the use of facial powder, a change in how younger consumers approach eating ice cream cones - to help solve a stunningly diverse array of challenges.
In Switzerland, a stuffed teddy bear in a teenage girl's bedroom helped revolutionise 1,000 stores - spread across twenty countries - for one of Europe's largest fashion retailers. In Dubai, a distinctive bracelet strung with pearls helped Jenny Craig offset its declining membership in the United States and increase loyalty by 159% in only one year. In China, the look of a car dashboard led to the design of the iRobot, or Roomba, floor cleaner - a great success story.
SMALL DATA combines armchair travel with forensic psychology into an interlocking series of international clue-gathering detective stories. It shows Lindstrom using his proprietary CLUES Framework - where big data is merely on part of the overall puzzle - to get radically close to the consumer and come up with the counter-intuitive insights that have in some cases helped transform entire industries. SMALL DATA presents a rare behind-the-scenes look at what it takes to create global brands, and reveals surprising and counter-intuitive truths about what connects us all as humans.