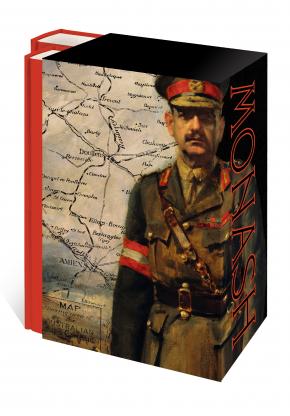 John Monash War Classics, In his own words . . .

War Letters of General Monash This collection of extraordinary, intimate letters from General Sir John Monash to his wife and daughter, records his experiences throughout World War I, from landing at Gallipoli to leading decisive victories on the Western Front. Monash writes with remarkable insight and candour. Republished in full for the first time since the 1930s, this collection includes an introduction and historical notes by A.K. Macdougall, new photos of Gallipoli and the Western Front, and additional letters, including Monash's moving final letter to his wife before the Gallipoli landing. The Australian Victories in France in 1918 First published in 1920, this famous work by General Sir John Monash, regarded as the best allied commander of World War I, immediately garnered glowing praise as one of the most entertaining and informative accounts of war ever written. It is now recognised as one of the most important records of World War I. This edition features a new foreword, stunning photos, and colour reproductions of the original maps that were hand-drawn under Monash's supervision. Presented here in a collectors' slipcase, the War Classics, offer unparalleled insight in the role of Australians in World War I, and into the experience of one of Australia's greatest leaders, General Sir John Monash.