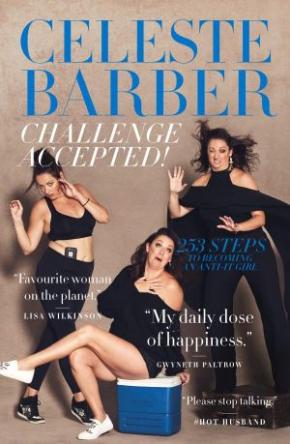 Funny woman, Instagram star and international comedy sensation, Celeste Barber's Challenge Accepted! is a hilarious and outspoken guide to life, unwanted gas and how to rock a sexy scar. It's real, like totally, really real.

Actor, writer and comedian, Celeste Barber is one very funny woman - not to mention a global social media comedy phenomenon. Amassing over 3.8 million followers in three years with her hilarious #celestechallengeaccepted pics, she has been dubbed 'Australian Comedy Queen' by ABC Online; voted The Funniest Lady on Instagram; gone on sold-out comedy tours of the US; and won herself fans ranging from Tom Ford and Ruby Rose to Amy Schumer and Dawn French.

In the tradition of Tina Fey's Bossypants, Challenge Accepted! is part memoir, part comedy routine, part advice manual. Calling out our ridiculous obsession with celebrity Instagram culture, Celeste reveals all, including her thoughts on keeping it real, the secrets to love, friendship, family and marriage ( oh hai, #hothusband), and how to deal with life's many challenges, like, motherhood, and what to do when your local bottle shipowner can't remember your name.

Celeste is raucous, real and hilarious. Bring it on.