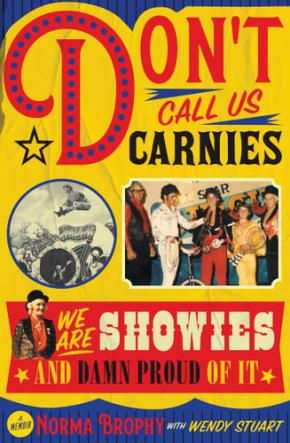 by Norma Brophy with Wendy Stuart

While many Australian teenagers have dreamed of joining a travelling circus, Norma Brophy wanted to run away from it. As a born and bred 'show person', she adored her early years on the road, running wild in town after town with her fellow little 'showies'. But growing up backstage of a famed travelling show wasn't all fun and games. At 15, Norma fled the circus and her father's violent ways, only to be drawn back by another formidable force - love.

In this vibrant, uproarious and poignant memoir, multi-talented showbiz matriarch Norma Brophy comes out of retirement to reveal a world of interest to many but understood by few. From a time before cars to the hardscrabble Depression years, in and out of war time and across the golden era of Hollywood-tinged showmanship, right up to today, Norma paints a vivid picture of Australian show culture. With authority and candour, Norma plays ringmaster to a cavalcade of characters and places that have helped form not only the story of her own record-breaking, death-defying family, but also that of countless other travelling show people, circus and rodeo folk whose exploits and ingenuity will leave you agog.