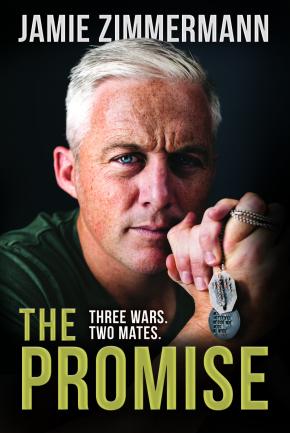 It was a blood oath between best friends.

As Sergeant Brett Wood prepared for a third tour of Afghanistan, he made fellow Commando Jamie Zimmermann promise to take care of his wife and financial affairs should the worst unfold. When Brett was killed two months later, it tore two worlds apart. The Promise is the extraordinary story of two mates, Jamie and Brett, each with two families - the family at home, and the brotherhood that bonds military servicemen in times of war. It charts Jamie's evolution from a bullied boy in the suburbs to an elite soldier and team leader with the 2nd Commando Regiment of Australia's special forces, waging war in Timor, Iraq and Afghanistan. As Jamie and Brett face ever more dangerous missions, the pressures intensify on the home front. Marriages crack, families fracture and the aftershocks of combat fatigue threaten both men's lives. After Brett's death, Jamie watches all certainty slip away. He commits mind and body to the one thing he can control: he will honour his friend, he will keep his promise.