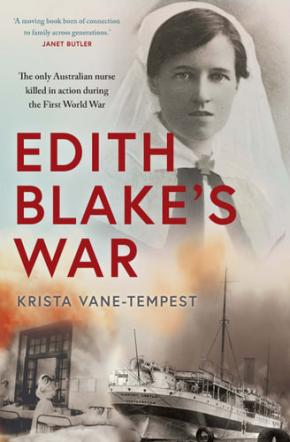 Edith Blakeâ€™s War: The only Australian nurse killed in action during the First World War

In the early hours of 26 February 1918, the British hospital ship Glenart Castle steamed into the Bristol Channel, heading for France to pick up wounded men from the killing fields of the Western Front. Onboard was 32-year-old Australian nurse, Edith Blake. After being torpedoed by a German U-boat, the Glenart Castle took minutes to sink. Of the 182 onboard, 153 perished including all eight nurses.

After missing out on joining the Australian Army, in 1915 Edith Blake was one of 130 Australian nurses allocated to the Queen Alexandra's Imperial Nursing Service by the British government. In very personal letters to her family back home Edith shares her homesickness, frustration with military rules, and the culture shock of Egypt. In Edith Blake's War, her great niece Krista Vane-Tempest traces Edith's story from training in Sydney to her war service in the Middle East and the Mediterranean; her conflicted feelings about nursing German prisoners of war as German aircraft bombed England, to her death in waters where Germany had promised the safe passage of hospital ships.