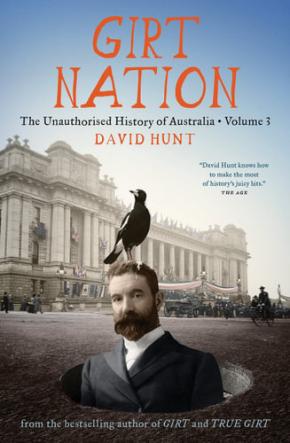 David Hunt tramples the tall poppies of the past in charting Australia's transformation from aspiration to nation - an epic tale of charlatans and costermongers, of bush bards and bushier beards, of workers and women who weren't going to take it anymore.

Girt Nation introduces Alfred Deakin, the Liberal necromancer whose dead advisors made Australia a better place to live, and Banjo Paterson, the jihadist who called on God and the Prophet to drive the Australian infidels from the Sudan 'like sand before the gale'. And meet Catherine Helen Spence, the feminist polymath who envisaged a utopian future of free contraceptives, easy divorce and immigration restrictions to prevent the 'Chinese coming to destroy all we have struggled for!' Thrill as Jandamarra leads the Bunuba against Western Australia, and Valentine Keating leads the Crutchy Push, an all-amputee street gang, against the conventionally limbed. Gasp as Essendon Football Club trainer Carl von Ledebur injects his charges with crushed dog and goat testicles. Weep as Scott Morrison's communist great-great-aunt Mary Gilmore holds a hose in New Australia. And marvel at how Labor, a political party that spent a quarter of a century infighting over how to spell its own name, ever rose to power.

Growing Up in Australia