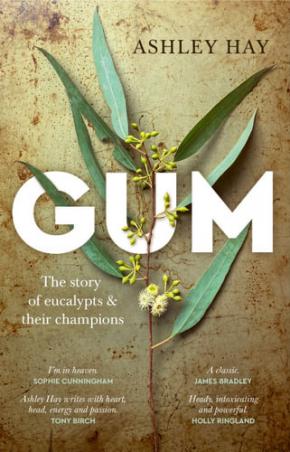 Gum: The story of eucalypts and their champions

No matter where you look in Australia, you're more than likely to see a eucalyptus tree. Scrawny or majestic, smooth as pearl or rough as guts, they have defined a continent for millennia, and shaped the possibilities and imaginations of those who live among them.

Australia's First Nations have long knowledge of the characters and abilities of the eucalypts. And as part of the disruption wrought by colonial Australia, botanists battled in a race to count, classify and characterise these complex species in their own system â€“ a battle that has now spanned more than two hundred years. Gum: The story of eucalypts & their champions tells the stories of that battle and of some of the other eucalyptographers - the explorers, poets, painters, foresters, conservationists, scientists, engine drivers and many more who have been obsessed by these trees and who have sought to champion their powers, explore their potential and describe their future states. Eucalypts have fuelled this country's mighty fires as readily as they've fuelled so many arguments about the ways they might be thought of â€“ and yet they are as vulnerable as any other organism to the disruptions and threats of climate change. This new edition of Gum, from award-winning author Ashley Hay, is a powerful and lyrical exploration of these transformative and still transforming trees. It's a story of unique landscapes, curious people, and very big ideas.