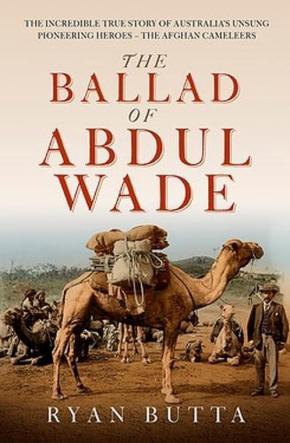 The Ballad of Abdul Wade

Told with flair and authority, this gritty alternative history defies the standard horse-powered folklore to reveal the untold debt this country owes to humble dromedaries, their drivers and those who brought them here.

When Afghan entrepreneur Abdul Wade first brought his camel trains to the outback, he was hailed as a hero. Horses couldnâ€™t access many remote settlements, especially those stricken by flood or drought, and camel trains rode to the rescue time and time again. But with success came fierce opposition fuelled by prejudice. The camel was not even classed as an animal under Australian law, and, in a climate of colonial misinformation, hyperbole and fear, camel drivers like Wade were shown almost as little respect. Yet all the while, for those in need, the ships of the desert continued to appear on the outback horizon. After his interest was piqued by a nineteenth-century photo of a camel train in a country town, Ryan Butta found himself on the trail of Australiaâ€™s earliest Afghan camel drivers. Separating the bulldust from the bush poetry, he reveals the breadth and depth of white Australian protectionism and prejudice.